You know about Burke and Hare, right? Edinburgh, the Athens of Europe, was home to the finest medical school around. Cadavers, however, were hard to come by. The only legitimate cadavers for medical study were executed criminals, leaving anatomists in short supply. There was, however, a healthy trade in grave robbing, the grave robbers commonly being known as Resurrectionists.

Enter William Burke and William Hare who decided to cut out the middleman, so to speak, and do the killing themselves. They were eventually caught; Hare turned crown's witness, leaving Burke to be condemned and his body to be publicly autopsied at the medical school.

I loved this story. Yes, well, I have a grisly turn of mind. So you can imagine how thrilled I was to learn that it is being turned into a movie starring Simon Pegg as William Burke. Simon is also the title character in one of my favorite movies, the start of my zombie obsession, Shaun of the Dead ("A romantic comedy. With zombies.").

I'm also pleased that Burke and Hare is being filmed as a black comedy--just as I might have hoped--at the legendary Ealing Studios. And it also stars John Cleese, Tom Wilkinson and Isla Fisher. Due out late in 2010. I can't wait! Here's hoping it turns out bee-yu-ti-ful-ly. And delectably dark. 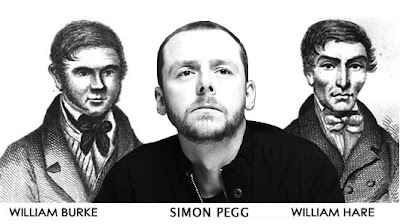 Email ThisBlogThis!Share to TwitterShare to FacebookShare to Pinterest
Labels: because I'm a geek, evil thoughts, film and culture, somewhat inappropriate, things I like, zombies

I can't think of a Simon Pegg movie I haven't liked. Shaun of the Dead probably is the best, but Hot Fuzz? Hysterical. the one where he runs? Sweet and funny. I even liked Star Trek, which he was in.