Email ThisBlogThis!Share to TwitterShare to FacebookShare to Pinterest
Labels: baseball, music, well I think it's funny

Various & Sundry: in which quite a few people make very good points

Hello! I'm back. And we have much to discuss. But at the moment, here's a few odds and endy things I wanted to share.

What do you say to a person who asks if suicide is a legitimate option for someone "who genuinely is tired and doesn't want to continue"? I thought this was a terrific answer.

I've never really thought much one way or the other about Libertarianism, but Lance Mannion sure has and has the rant to prove it. "You don’t have to believe in no government," he writes, "but if you aren’t at least trying to take yourself off the grid and off the dole, then I’ve got to conclude that your professed libertarianism is just a high-fallutin’, long-winded, and, usually, very boring way to complain about your taxes." He may have a point.

I've started following the blog Our Valued Customers which reports on snippets of conversation from a comic book store. 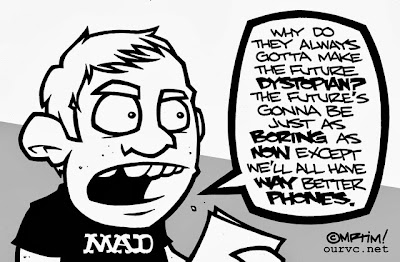 He may have a point, too.

Ta-nehisi Coates also has a mighty good rant going with his post on The Selective Amnesia of Post-War Europe, which is not quite the stuck-in-the-past post you might think it is. (Or maybe I'm just particularly close to it, having recently finished the post-war-set Bernie Gunther mystery A Quiet Flame, which I'll get around to reviewing one of these days.) This was the key quote for me: "'The past' is whatever contributes to a society's moral debts. 'Heritage' is everything else." Say it with me now: He may have a point.

Although this article is ostensibly about the dangers of playing it safe, it's also an excellent example of keeping the long view in order to foster change in an organization. The writer, who encourages organizations to take risks, also (I think) learned the important lesson: Change happens in mysterious ways.

In a fit of self-promotion, and because I'm pleased with how it turned out, I'd like to pass on a blog post I wrote on 4 reasons youth hate confirmation classes. You'd hate them too.

Go, Red Sox! Check out this amazing Red Sox Bento Box lunch, with an apple carved into a baseball:

Finally, seeing as it's almost noon, I recommend the essay On Lying In Bed by G.K. Chesterton. Is it immoral to lie about in the morning? "Instead of being regarded, as it ought to be, as a matter of personal convenience and adjustment, it has come to be regarded by many as if it were a part of essential morals to get up early in the morning. It is upon the whole part of practical wisdom; but there is nothing good about it or bad about its opposite." He most certainly has a point.

And did I mention? Go Red Sox! 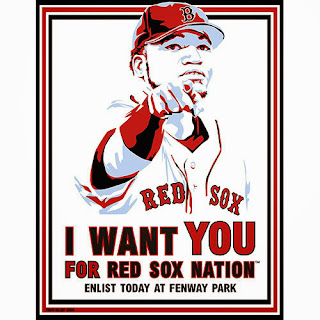 Back in the days when I was a sign language interpreter, one summer I worked with a summer school class of five kids: three boys and two girls. One day, the teacher divvied them up into two teams for a Jeopardy-style lesson: boys on one team, girls on the other. And even though there were more boys than girls, and even though every time the girls answered a question, the teacher said to the boys "Get ready to steal!", and even though the girls team was in the lead the entire time, at the end of the game, when the girls' team had won, the boys yelled, "It's not fair!" And the teacher, for reasons I shall never fathom, said, "OK, let's call it a draw."

What I see with the government shutdown reminds me daily of this incident.

Email ThisBlogThis!Share to TwitterShare to FacebookShare to Pinterest
Labels: a willful display of ignorance, further reflections, in the news, late to the party, looking at images

It would be wrong of me not to let you know that the 6th Earl Grey, the great-great-grandson of the Earl Grey who gave his name to Earl Grey tea, died in September. It should also be noted that he (the 6th Earl, that is) was the president of the Cremation Society of Great Britain.

Dead people and tea. He's my kind of guy. Or was. 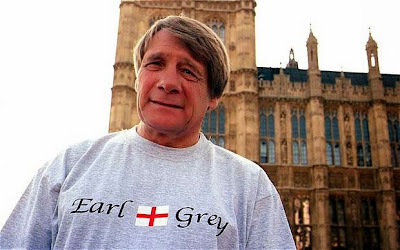 Check out the full obit here.
Posted by LTD at 9:49 PM 0 comments

Something we've all said to ourselves from time to time

Though in my case it's more "chips and salsa" than "peanut butter and raisins." "Chocolate thingies" still holds true though.
Posted by LTD at 7:00 AM 1 comments

Email ThisBlogThis!Share to TwitterShare to FacebookShare to Pinterest
Labels: food, well I think it's funny

Why I hate tithing, and what I recommend instead

You may recall that I posted a sermon a few weeks ago in which I get pretty shirty about tithing. Well, the brave folks at the Church of the Incarnation, Santa Rosa, invited me to contribute to their stewardship materials, thus putting their money where my mouth is. I hope I helped them!

Here's what I wrote. 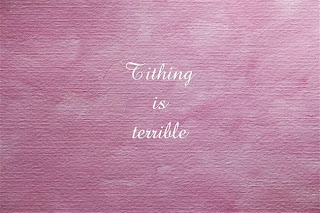 I hate tithing. I don’t mean that I hate to do it; I mean that I think it’s a terrible way to determine giving. It’s so mechanical! So guilt-laden, too. But all my life, I’d heard people talk about the tithe as the Biblical basis of stewardship. It wasn’t until a few years ago that I thought, “Hey, wait a minute! People keep talking about tithing as Biblical, but I’ve never actually seen any of these texts!”

I was surprised by what I discovered. Did you know that tithing only refers to agricultural products? That’s why you hear Jesus talks about the Pharisees “tithing mint and rue and herbs of all kinds” (Luke 11:42) – they were keeping to the letter of the law down to the herbs in the kitchen garden.

But looking at the New Testament, what I see as the Biblical standard of giving is not tithing, or any sort of definitive rule. Instead, I see two traits that characterize faithful giving: generosity and mission.

Generosity: Unlike tithing, which is simply a math problem, generosity is a spiritual practice. I know many generous people who are tithers, but tithing on its own is simply about a transfer of goods or money from one entity to another. Generosity, on the other hand, is the attitude in which the tithing – or any giving – is undertaken. Tithing answers the question, “Have I done enough?” Generosity answers the question, “How can I contribute as much as possible?”

Mission: One of the things that most annoys me about tithing is that it is so disconnected to what happens to the money. But what I see over and over again in the New Testament is that giving is directed to some purpose: supporting Jesus’ ministry, helping one another in the church, caring for widows and orphans, or reaching out to the church in Jerusalem.

Mission is actually the question of generosity as it is answered by a community or organization: “How can we as a group contribute as much as possible?” When we are clear about our mission, it makes it clear why we are giving and what we are giving towards. Tithing eliminates any dialogue, expecting people to shut up and give because the Bible says so. But a call for giving based on mission opens the question of what it is we hope to do together and how can we get it done.

And so I would encourage the community of the Church of the Incarnation, Santa Rosa, to reflect on the mission of your congregation: how can we contribute? Talk about it with one another, and really come to grips with what it is you want to do together and how to accomplish that.

Then as individuals, take time to answer that same question: How can I contribute? If Incarnation has a mission that excites you that you want to support, what can you do to make that happen?

Paul, writing to the wealthy church in Corinth, challenged them to give to support the church in Jerusalem as the much poorer church in Macedonia had done. He summarized giving in a way that resonates with me, saying, “If the eagerness is there, the gift is acceptable according to what one has” (2 Corinthians 8:12).

I hope you are eager to see the great things you can do as the Church of the Incarnation, and I pray that you might be able to give generously to see that happen.
Posted by LTD at 1:53 PM 0 comments

And probably yours too.


A chemist long affiliated with the United States Department of Agriculture, Dr. Benerito helped perfect modern wrinkle-free cotton, colloquially known as permanent press, in work that she and her colleagues began in the late 1950s. 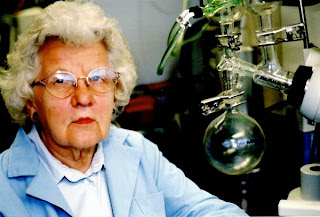 That's right. This is the woman who made it possible for us not to iron every piece of cotton we wear.

She died last Saturday at the age of 97. If you're wearing any permanent press clothing today, take a moment to remember Dr. Benerito and all the others who made that possible.

British take (which notes her home of 56 years was destroyed by Hurricane Katrina) here.
Posted by LTD at 6:27 AM 0 comments

Your Country & Western Music Video of the Week

Because I just keep watching it.