What does this picture say to you? 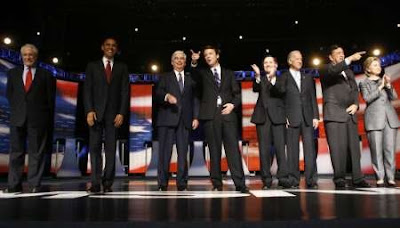 OK, let's look at this picture, shall we? (photo from Reuters)

Here we have our eight presidential candidates from the Democratic party before their debate on Thursday. How many of them do you recognize by sight? Personally, I recognized two immediately and one more when I looked closely.

But aside from my own political ignorance, I was struck by the composition of the photo and a variety of messages it conveys.

First of all, there are the groupings. Off to stage right is former Senator Mike Gravel, of whom I had never heard, looking a bit uncomfortable and isolated, standing with his hands behind his back, not smiling, looking down. Next to him is Barack Obama, also singled out, but looking very confident and comfortable with his hands resting at his sides, smiling, looking up and out.

Then we begin to see clumping. Note that our next two candidates (unidentified in the caption on Reuters, but they are, I believe, Senators Chris Dodd and John Edwards) are leaning in towards each other. What is Edwards pointing at, I wonder, or is it just something to do with his hands?

In our next grouping, clapping appears to be a useful activity, so you don't just stand there feeling silly. In this group we have Kucinich, Biden, Richardson, and Clinton, standing together, but engaging the audience, pointedly looking in different directions.

Next, note the attire. What does it say that all the suits are the same color? Except for Clinton's, of course. But the men look pretty much identical. Why? How is it that dark navy is the presidential color this year?

Regarding Clinton: a) she is wearing trousers; b) her light-colored suit does set her off from the rest of the field; c) she is standing to the far side of the group, as if she doesn't quite fit into the field. Of course, setting oneself apart from the rest of the field would be the point in an election. But there's something in the image that suggests to me she is not really accepted as a player on the team. Because she is part of a clump, but on the edge of the clump.

Barack Obama is the other one set apart, but in this image, at least, it makes him look like the leader of the group.

That's a lot to read into a photo, but that's what images do. Incidentally, Obama is not my candidate--at the moment--but I'm not saying who my candidate is--at the moment.
Posted by LKT at 11:15 AM 0 comments

Email ThisBlogThis!Share to TwitterShare to FacebookShare to Pinterest
Labels: election thoughts, in the news, looking at images

OK, so I'm utterly fascinated by the story of the Dean of Admissions at MIT who never got a college degree, lied about it, wrote a book about how important integrity is in the admissions process, was found out (how, exactly?), and has, understandably, resigned. And, yes, she couldn't have done anything else, and it's a classic tragedy where the seeds of her undoing were there from her own actions. Many other things, too. The thing that's fascinating to me right now, though, is I haven't yet heard anyone talk about how a person can do a terrific job without a college degree. At MIT, no less.

I remember a friend of mine in college talking about getting a PhD--not because she was driven to learn about her subject to that depth, but because she thought she couldn't get a job without one. Personally, it seems to me that it's harder to get a job WITH a PhD, but the fear was real. Lord knows I'm not knocking advanced degrees; I'm just saying that the fear, which is part of what this dean was fighting against, is crippling.

Strange, too, because I'd never heard of this "guru" of calming down admissions frenzy until her resignation, but I'm glad to hear someone was saying, "You don't have to be perfect to go to college."
Posted by LKT at 11:03 AM 0 comments

What with being on vacation and all, I actually did a little reading, though not all that much. The vacation being in Hawaii, with snorkeling and activities galore, I ended each day thoroughly pooped, and only completed one novel in my time away.

Pooped like bear, I was, and that would make more sense to you if you read "A Dirty Job" by Christopher Moore. Not only does the book have a cover that glows in the dark, not only is there a Russian neighbor who is "possessed of an atavistic compulsion toward ursine simile," not only does it have an engaging plot about death, not only does it make me laugh out loud on almost every page, but it also contains the immortal line, "I like my men like I like my tea: green and weak." Don't we all wish we'd thought that up ourselves? I certainly do.

Before vacation, I read "The Polysyllabic Spree" by Nick Hornby, which is a book full of book reviews, making me feel unworthy and slow, but I loved it nevertheless. I now am possessed of an atavistic compulsion toward reading David Copperfield, but I think it will fade soon.

Because, let's face it, that's two--two!--relatively worthy books in under a month. I'm not sure I can keep this up.
Posted by LKT at 4:29 PM 0 comments

Email ThisBlogThis!Share to TwitterShare to FacebookShare to Pinterest
Labels: books, worthy and unworthy

OK, so I've been gone again, but I've been on vacation. That's my excuse.

I left just after the tragedy at Virginia Tech and feel I have not given it the attention and grief that it is due, and so I have been reading NY Times articles from the previous week about it. The cheek comes from President Bush who was quoted as follows:

In previous cases like that of Virginia Tech, “there have been warning signals that if an adult, for example, had taken those signals seriously, perhaps tragedy could have been avoided,” Mr. Bush said at a town meeting in Tipp City, Ohio.

Hello? 9/11, anyone? If anyone should have some sympathy over whether or not those in authority should take a warning sign seriously, it should be the president. And all the second-guessing in the world is not helpful at this point.

My hearts and prayers go out to all those killed, and especially to their families.
Posted by LKT at 3:06 PM 0 comments

Wrote up the list of those killed in Iraq this week, and it was painfully long. Included two young women, Eleanor Dlugosz (19) and Joanna Dyer (23), both British, from the Duke of Lancasters Regiment (they have such great sounding troop names), killed along with two men and a civilian interpreter in Basra.

The women's names still stand out to me when I'm typing up the lists, whether right or wrong. What are they doing there, I tend to wonder. One of these young women was a nurse; the other in intelligence. The ages also upset me. I have trouble seeing that teenagers are being killed.

Not that older is better. I didn't like seeing the 42-year-old Naval officer's name on the list this week. Not that there is a good age at which to die in this war, but between 23 and 39 I tend not to notice the age so much.

On the Iraqi side, looking at the news reports of those killed, I was particularly affected by the article reporting "Police discovered the body of an 11-year-old boy with his throat slit in Sab al Bor, north of Baghdad, the U.S. military said. A local al Qaeda cell was suspected." And that is the extent of the report. Also can't say I was thrilled to hear "Bodies of six goat-herders were found shot west of Kerbala, 110 km (70 miles) south of Baghdad, police said." What is wrong with people?
Posted by LKT at 12:26 PM 1 comments

Email ThisBlogThis!Share to TwitterShare to FacebookShare to Pinterest
Labels: Iraq

Prayers of the People

I was preparing the Prayers of the People for this Sunday's service today and in the Anglican Cycle of Prayer for this Sunday, April 15, we pray for the Bishop of New Hampshire--that is, Gene Robinson, the man so many blame for the conflict that is in the Anglican Communion today. Oh, if only he hadn't run for bishop, people wouldn't be upset, so it's all his fault, the thinking goes. In which case, we should more likely blame the clergy and delegates of the diocese of New Hampshire who elected him.

But I really am pleased that he is going to be the subject of prayer throughout the Anglican Communion on a Sunday. I'll be curious what kind of reaction that gets. But I also think it's a wonderful thing that we must pray for others, even when we disagree. Of course, I'm kind of chortling to myself, but it's a lesson to me as well.
Posted by LKT at 12:21 PM 0 comments

Email ThisBlogThis!Share to TwitterShare to FacebookShare to Pinterest
Labels: prayers

Yesterday, I was driving behind a car that had a license plate holder that read "600" on the top, and beneath it said, "HE IS IN ME." Couldn't make it out for the longest time. What was this mysterious 600 that was in the driver of the car? Puzzled about it for a good long block, tailgating the driver mercilessly and racking my brain for some 600 cult or extra meaning that would make sense of the thing. Finally figured out that 600 was, in fact, the letters G-O-D in very blocky font. A worthless story, but it amused me nonetheless.
Posted by LKT at 9:53 AM 0 comments

Long time, no blog! First I was away and then I was sick and then it was Holy Week. That's my story and I'm sticking to it. And so many things have gone by with no comment. I was particularly sad not to wax eloquent on the headline, "8,000 pot plants found; two arrested."

But for now, I just want to add my two cents to the rightful denunciation of Don Imus' truly offensive comments about the Rutgers women's basketball team. What really got my blood boiling was his comment quoted in the NY Times this morning when he said on Al Sharpton's program, "I think what makes a difference, a crucial difference is: What was my intent?”

Ah, yes, the "in my heart, I'm a good and decent person" defense. But as Jesus said, "it is out of the abundance of the heart that the mouth speaks." (Luke 6:45b) Imus would not have said what he said had it not been somewhere in his heart. It may be expedient to deny that in public, but I hope he's taking a good, hard look at himself.

And two weeks suspension? NBC should be ashamed. I don't understand why Imus and his ilk are not pariahs in the media world. But that's just me.
Posted by LKT at 12:03 PM 0 comments