Gone with the Wind

Rhett Butler died this week in Iraq. He was a corporal, not a captain, and he was 22 years old, and he was from Fort Worth, Texas. He died in an IED attack in Khan Bani Saad in the Diyala province of Iraq.

Each week, we include the names of those killed the prior week in Iraq, thanks to a website called icasualties.org. We include the names of soldiers killed and as many Iraqis whose names are reported. Most often, the names just slip past me. I often will note the women, at least their first names, and linger over them a minute. When I see a name that is the same as someone I know, I will say a special prayer. Rhett Butler really caught my eye. God's blessing and peace be upon you and all who love you.
Posted by LKT at 10:37 AM 0 comments

Email ThisBlogThis!Share to TwitterShare to FacebookShare to Pinterest
Labels: Iraq

How hard can this be?

Just read an article in the Chronicle about a study that shows eating more fruits and vegetables doesn't reduce the risk of breast cancer returning. "The results weren't what researchers had expected or hoped for," says the article, which goes to show how easy it is to fall into the "more is better" fallacy. Five servings of fruits and vegetables are good for you; more must be even better!

Call me crazy, but I simply think eating a variety of healthy foods with a goodly amount of fruits and vegetables is really all that is called for. Not that I do it, mind you. But I'm not sure it's all that complicated. Not really a news flash either.
Posted by LKT at 9:10 AM 0 comments 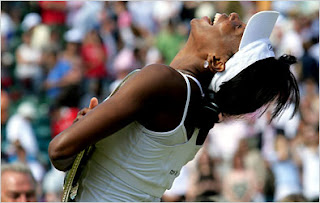 She looked magnificent today, striding about the court, beating what I couldn't help but think was "poor, little" Marion Bartoli in a two-set blitz, despite the fact that poor little Marion Bartoli had beat Justine Henin and was, in fact, seeded higher than Venus.

But I was pleased for Venus anyway and rooted for her to win despite the fact that I hardly consider her the underdog.

And then came the interview after the match.

WOULD SOMEONE PLEASE TELL VENUS NOT TO THANK HER FRIENDS AND FAMILY DURING THE INTERVIEW ON COURT?

I mean, there's nothing wrong with thanking friends and family, and why not do it publicly in that venue? But it just sounds unprofessional. Not only does it sound unprofessional, it makes Venus seem small in comparison with "poor little" Marion Bartoli. Girlish, I guess is the word I'm looking for. Bartoli looked poised and sounded like not only a professional but an adult. Venus in comparison looked like a little girl.

I suppose if you've won four Wimbledons you get to say whatever you want. Who am I to gripe? But I want her to look good, and it just doesn't make her look good to me when she uses the post-match interview to say Hi, just as if she were a casual baseball fan who found herself on the jumbotron at the ballpark. I want her to act like the grown-up professional that she is.
Posted by LKT at 12:45 PM 0 comments

Email ThisBlogThis!Share to TwitterShare to FacebookShare to Pinterest
Labels: snarkiness

The Fourth of July

My heart wasn't in it this year. We had the annual parade and it seemed so commercial to me. It wasn't just realtors sponsoring floats for civic organizations. It was realtors sponsoring floats for realtors. The best thing as far as I was concerned was the middle school drum cadet corps, making a lot of glorious noise as they walked down the street.

What happened to the precision lawn chair brigade that I remember from my youth? Too many people handing out flyers for things, and I can't blame them. It's a free country, and what a great opportunity to get your message out to the community. But still...I had hoped the Fourth of July parade would be about something else. When they wrote about a land of opportunity, I didn't think that meant we should be opportunistic.

I was driving somewhere when I heard the soundbyte from President Bush's speech to the West Virginia Air National Guard, when he said that "Victory in this struggle will require more patience, more courage, and more sacrifice." And the tone of voice when he said that, so defensive and so condescending, I couldn't take it. Paul Krugman in the Times today asked what sacrifice Bush has made, and I can't agree more.

To get the exact quote, I read through Bush's speech. It's highly inflammatory and deeply offensive. http://www.whitehouse.gov/news/releases/2007/07/20070704.html

"We believe in an Almighty, we believe in the freedom for people to worship that Almighty. They don't. They don't believe you should worship the way you choose. They believe the only way you should worship is the way they choose. And, therefore -- and, therefore, they will do anything they can to spread that ideology. And it's our charge, it's our calling to keep the pressure on these people, to defend America and to spread an ideology of hope and an ideology of peace so that the kids who came up here to give the Pledge of Allegiance will be able to live in peace and security. (Applause.)" Again with the "we," but with the pernicious "they" attached. This monolithic "they"--and how exactly are they going to force us in the US to worship in the way "they" choose? I never heard that this was a war about freedom of worship; if that's so, then bring the troops home immediately. I feel perfectly free to worship the way I choose.

verse 2 of O beautiful for spacious skies comes to mind:

"O beautiful for heroes proved
in liberating strife,
who more than self their country loved,
and mercy more than life!
America! America!
God mend thine every flaw,
confirm thy soul in self-control,
thy liberty in law."

Email ThisBlogThis!Share to TwitterShare to FacebookShare to Pinterest
Labels: in the news, rhetoric

I have often thought of adding my 2 cents to the world, but then I thought, why? I could have chimed in on Paris Hilton, or Scooter Libby, or the 4th of July. I could have written about Irenaeus or Evelyn Underhill. But I have been mum. The truth is, I feel like anything I could have added these past few weeks would have been superficial at best. Today is the first morning I've felt I could sit down--away from the computer, that is--and contemplate for a good long while. Not that this makes me any more insightful, mind you, but it at least gives me a basis for thought beyond the obvious. As I promised up front, I require steepage in order to read, mark, learn and inwardly digest.

Onward, fully brewed tea in hand.
Posted by LKT at 11:01 AM 0 comments