You heard about this, right?

On Monday, World Vision announced in Christianity Today that it was changing its hiring policy so that gay Christians in legal marriages could be hired. Rich Stearns, president of World Vision, explained the policy change this way:


"It's easy to read a lot more into this decision than is really there," he said. "This is not an endorsement of same-sex marriage. We have decided we are not going to get into that debate. Nor is this a rejection of traditional marriage, which we affirm and support." "We're not caving to some kind of pressure. We're not on some slippery slope. There is no lawsuit threatening us. There is no employee group lobbying us," said Stearns. "This is not us compromising. It is us deferring to the authority of churches and denominations on theological issues. We're an operational arm of the global church, we're not a theological arm of the church."

The shit immediately hit the fan with close to 5,000 people canceling their sponsorships of children. In less than 48 hours, Stearns announced that the board reversed the decision, saying it was a mistake.


"We made certainly in retrospect was a bad decision, but we did it with the right motivations. We weren’t trying to harm, or trying to find revenue, we weren’t doing it for wrong motives. We were trying to find some kind of solution to a divisive issue that would create some space of togetherness around differences within the church. Our regret is that we caused more division instead of finding a place of more unity."

So by Wednesday, I had a fair number of thoughts going through my head. Let me see if I can set them out in any sort of coherent order.

First of all, I'm hugely disappointed by how this whole thing played out. And although I'm upset at those who decided to withdraw their sponsorship of children, I have to admit I understand it. I have not been a financial supporter of World Vision in part because of its conservative Christian background (not the only reason, but one of them). So I'm certainly in the same boat as people who don't want to support an organization that they think represents values counter to their own.

I'm much more disappointed with World Vision, for a few reasons: 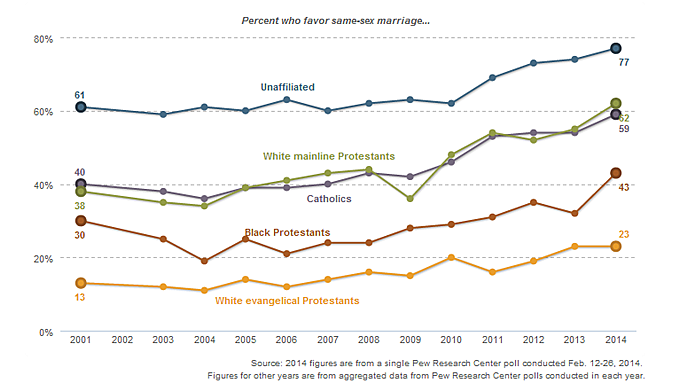 I was appalled at this particular statement in Stearns' retraction: "We’re learning that a number of people are calling back since the reversal to reinstate their sponsorship. They’re forgiving; they’re saying, ‘Hey we stand with you.’” That, sir, is not forgiveness, any more a child stopping a tantrum after you buy him a toy means the child has forgiven you.

I wish them the best, but I continue to believe this was a huge mistake. 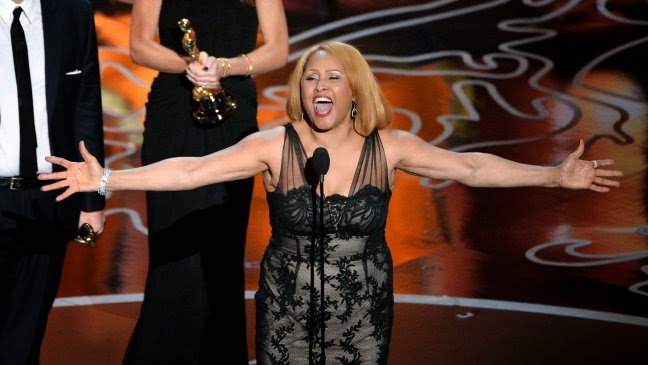 I remember thinking when it came out that I'd wanted to see this, but it wasn't until it won the Oscar for Best Documentary Feature that I finally got around to watching Twenty Feet from Stardom.

This film literally shines the spotlight on the back-up singers of the hits for the past 50 years, and it's revelatory. You will not believe how many of these voices you know intimately from songs fronted by performers ranging from Gene Autry to the Rolling Stones to Sting to Nine Inch Nails.

I don't think it escapes anyone's notice that the primary front-line vocalists are white men and the back-up singers are black women. One of the wonderful choices the director made at the beginning of the film is to blot out the faces of the stars on the album covers so we finally take the time to notice the various "ettes" behind them. What makes it clear is these women aren't diminutive. They are divas and forces to be reckoned with.

The story of the vocals on Gimme Shelter is particularly eye-opening. Merry Clayton, pregnant and home asleep, is awakened and told she needs to come to the studio to do some vocals for "The Rolling Somethings." She shows up in curlers, as both she and Mick Jagger remember, and in three takes, screams out "Rape! Murder! It's just a shot away." Then goes home to bed. In this great video interview in the NY Times, Clayton explains that she was just looking to go back to sleep. She also prods the director to reveal the real reason the producer wanted to make the film.

Another of the featured singers, Lisa Fischer, has been touring with the Rolling Stones since 1989, doing this very vocal. Although she has won a Grammy for a solo R&B performance, the solo career never really came to fruition, and she seems at peace with her role in the background.

It's much harder for others, and neither peace nor success is easy to come by. Darlene Love, inducted into the Rock and Roll Hall of Fame in 2011 ("And about time, too," Bette Midler says, introducing her), was royally screwed over by Phil Spector as she sought to be recognized as a performer in her own right. Watching the film gave new insight into her performance accepting the Oscar, as she sang "I sing because I'm happy. I sing because I'm free. His eye is on the sparrow, and I know He's watching me." He's not the only one at this point. And about time, too.

Somewhere between being introduced to Peacebang's Beauty Tips for Ministers, watching Project Runway and the September Issue, following Tom and Lorenzo's blog, and reading Grace Coddington's memoir, I find that I've become interested in fashion. Who knew that would happen? 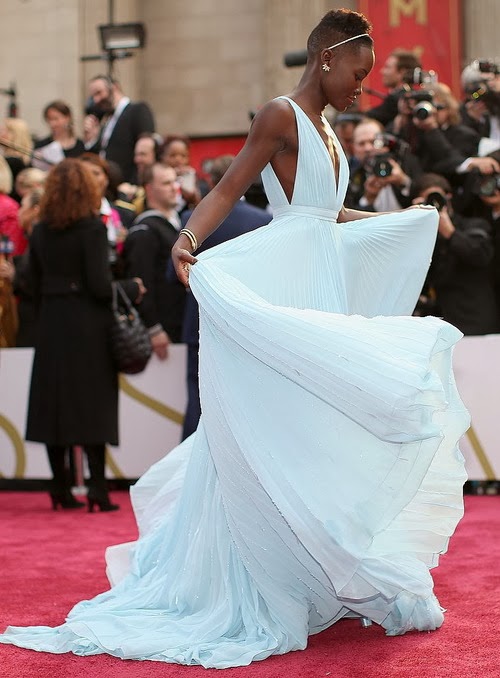 So I watched the red carpet coverage of the Oscars in part because I was dying to see what Lupita Nyong'o was going to wear. As what's-his-face interviewed her about who she was wearing (Prada, and again, who is this person who remembers that?), she explained that the color was "Nairobi blue" because it reminded her of the sky in Kenya.

And I thought to myself, We have just seen a new color name be born.

Sure enough, moments later on Twitter and in news reports that followed, people were writing about her Nairobi blue dress.

And I thought, how fabulous that from now on the name Nairobi will be connected in people's minds to beauty.

That wasn't the first wonderful gift to beauty that Lupita had offered. Aside from the way she carried herself throughout the awards season, she also gave an amazing speech at the ESSENCE Black Women in Hollywood Luncheon. Do read the whole thing, but this is the part that grabbed me hard:

I want to take this opportunity to talk about beauty. Black beauty. Dark beauty. I received a letter from a girl and I’d like to share just a small part of it with you: "Dear Lupita," it reads, "I think you’re really lucky to be this Black but yet this successful in Hollywood overnight. I was just about to buy Dencia’s Whitenicious cream to lighten my skin when you appeared on the world map and saved me."

One of the things I have been learning is that how we appear is not frivolous. How we present ourselves is not a mere outward show. It's a form of communication, and the messages it sends can be very powerful.

Again, do read the whole speech, but she ends with this:


What is fundamentally beautiful is compassion for yourself and for those around you. That kind of beauty enflames the heart and enchants the soul. It is what got Patsey in so much trouble with her master, but it is also what has kept her story alive to this day. We remember the beauty of her spirit even after the beauty of her body has faded away.

Just beautiful.
Posted by LTD at 9:13 AM 1 comments