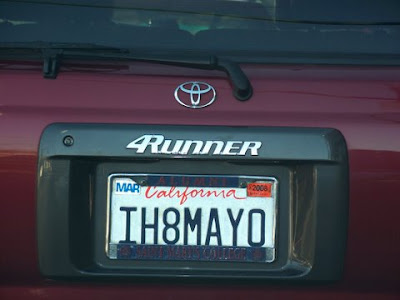 I thought of my friend DW as I saw this license plate the other day. Made me laugh. I mean, I know that there are mayo promoters and there are mayo loathers, but I didn't know one could loath a condiment so much that one would pay good money to announce it on one's car. Are there "IH8MAYO" license plates in every state, I wonder? And would they like it better if it were called "aioli"?
Posted by LKT at 12:13 PM 3 comments

Email ThisBlogThis!Share to TwitterShare to FacebookShare to Pinterest
Labels: food

Diocese of San Joaquin in pictures

Well, it's been quite a while, I see. I've had things to comment upon, but no time. But today, I have time AND something I noticed. And here it is, a photo from the NY Times taken at the convention of the Diocese of San Joaquin: 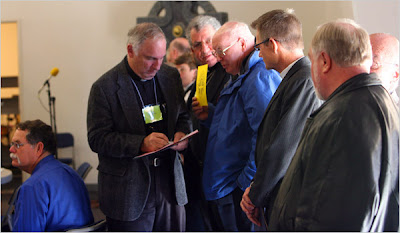 OK, first of all, it's very strange to me to be reading and hearing about the Episcopal Church in a national context; it was a top news story on the BBC, for pity's sake. I still have this underlying feeling that it's all just a little family affair. I'm not quite sure why all these other people are interested. But, heck, there's sex; there's money; there's a sense of the powerful elite brought low. I guess I shouldn't be surprised, but it is still odd to me.

That being said, I was struck by the age, gender, and ethnicity of all of the people in this picture. There might be a bit of a woman's head peeking through a couple of shoulders there in the middle, but by and large this is an image of White Males of a certain age.

Which begs the question: was this convention a preponderance of white males of a certain age? Or is this simply the image that the NY Times chose to present of the convention? Lord knows our own diocese is fairly pigment challenged, but we have some diversity. We have to strain a bit for it, but it's there. But we are definitely not estrogen challenged, and I suspect San Joaquin is. None of the clergy are going to be female, so that takes out a hundred folks right there. And it certainly seems unlikely that the majority of delegates would be women, though it's possible.

My point is that this image for me gives the impression of a diocese of old, mad white guys, no matter what the article tells me. The article is reasonable enough, but the picture suggests a certain caste of people holding on to power that was decided to be shared long ago.
Posted by LKT at 5:05 PM 1 comments