Myths we live by

I went to see "Enchanted" last week, which was OK, but not as great as I thought it would be given the preponderance of positive reviews. Amy Adams was a treat as Giselle, though, because I found her innocence completely believable, and that is no small feat.

One moment that struck me was just before the big production number in Central Park as Giselle reacts incredulously to the news that Patrick Dempsey's character does not sing to his beloved, and Patrick Dempsey looks completely mortified when Giselle bursts into song.

It made me think that men and women grow up with completely different myths about romance. Yes, sweeping generalization, here, and I don't know how men get away with not having the same myths, being exposed to the same popular culture, but it seems to me that women do get a certain myth of romance that, even if it does not involve production numbers, does involve a certain sense of drama.

I see it in ads particularly. Jewelers ads are a fine case in point. The man comes home with the Kay jeweler bag in hand, or hides it under a Christmas tree, or what have you. Now, are those ads directed towards men or towards women? I would suggest that those ads are for women. The jewelry ads directed at men are far more blunt: "Please the woman in your life with THESE DIAMOND EARRINGS which cost $X."

Meanwhile, there's an appalling ad directed towards men where the young dweeby kind of guy comes home where the tall blond goddess stands unloading dishes. The young man presses a button on her face, which folds back, and he places a new chip inside. Her face folds back into place and she asks, "Do you want to help?" "No, I'll just watch," he says. And I fear that is the myth men are given: the compliant and helpful woman unloading the dishwasher.

It seems to me that women are invariably disappointed when men are not romantic, and men are invariably disappointed when women have complaints. And we are fools if we think we are not influenced by these myths. They are potent and ubiquitous, and an excellent thing to watch out for in the Christmas ads that will bombard us over the next few weeks.
Posted by LKT at 11:25 AM 0 comments

Email ThisBlogThis!Share to TwitterShare to FacebookShare to Pinterest
Labels: film and culture, looking at images

I went to Starbucks today, something I don't normally do, mostly because I don't drink coffee and not because I am so high-minded or anti-corporate as to only purchase locally produced non-globalized products.

In part I went in reaction to an email forwarded on to me promoting an urban legend stating that Starbucks refused to send coffee to troops in Iraq because it refused to support anything to do with the war there. (Ironically, this urban legend was originally attributed to the Oscar Meyer company refusing to send hot dogs to troops.) It makes me mad when corporations are instantly considered to be The Bad Guys--especially given the level of military spending. I'm not sure why Starbucks should donate coffee to troops even if they DID support the war.

But I also wanted some hot chocolate and internet access and I figured both would be available there. I was partly right.

There's T-Mobile wifi access at the local Starbucks, but you have to pay for the privilege to use it. A day pass cost $9.99, which seems outrageous to me. I didn't buy it, but I did take a look at the wifi home page, a very clever arrangement upon which you can a) see the artist whose music is playing in the store at the time and then b) purchase the same on iTunes. How about that for integrated marketing!

I was a little disturbed to find that I already owned two of the songs I heard at Starbucks during the time I was there: Diana Krall sang "Peel me a Grape," and Holly Cole sang "I can see clearly now," songs and singers I like immensely. But what does that suggest about me? About my taste in music? Am I really a Starbucks kind of a person? Or does this suggest that I have a rather homogenized taste in music, bland but palatable to a bulk of the population? Or, to be more arrogant, perhaps this shows that I have good taste, and what's more that Starbucks has good taste in music, too. Certainly that could be possible.

But it was a bit disconcerting to hear such familiar songs in that setting, considering myself out of the mainstream as I do. And even more deeply disturbing to have those songs hawked to me almost instantaneously. And there is a sense that everything is for sale at Starbucks. At least there is for me. So perhaps that urban legend, though it is not based in truth, has some basis in experience.

Another disturbing aspect of the place is how hard it is to get an actual mug out of which to drink, even if you are staying there to drink your beverage. I ordered my peppermint hot chocolate, tall, for here, and the barista asked, "What was that last part again?" For. Here. Ah. And she did pull out a very lovely latte mug, heated it, and then stuck the order on with a specially designed post-it note for the drinks person to make for me. And it was lovely, quite frothy, with little red sprinkles on top of the whipped cream.

But as I looked around the place, I realized I was the only person with an actual cup in my hands; everyone else had disposible items as they sat at their tables, sipping slowly, reading the paper. I would hope that would be one part of the Starbucks corporate culture that could be changed.

There's a lot said about how Starbucks creates community. I'm not so sure. I think it creates something all right, but I'm not sure exactly what it is. I'll have to ponder this some more. Over a cup of tea this time.
Posted by LKT at 1:24 PM 1 comments

Because I ought to be doing something else, I am going to post another photo on my blog. Here it is: 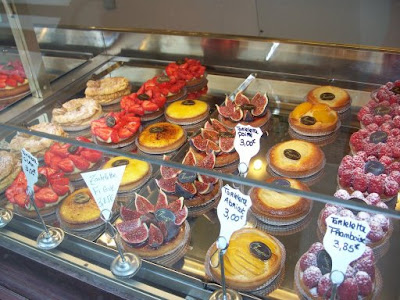 Is that not a beautiful sight? It raises a few questions, though. First of all, who buys and eats these pastries? I never saw any actual French people in possession of pastries of this nature, but then, one never knows what goes on behind closed doors. Or perhaps their pastry boxes are disguised as something else. Certainly I didn't see a lot of French people who seemed to over-indulge in these kinds of foods to the extent that I would, given half a chance.

Secondly, what happens to the pastries that are not eaten by the end of the day? Or the bread? Surely there is some. Where does all this amazing food go? Goodness knows there were enough patisseries and boulangeries per square inch to more than satisfy the population (I would think); so how do they all stay in business?

I'm guessing that absolutely no one, but no one, makes their own bread in Paris. I mean, that seems just redundant. Still, the reality of so many baked goods makes Paris seem more like a dream than reality.
Posted by LKT at 2:51 PM 1 comments

My dad is turning 70 tomorrow, which continually surprises me. I know this will sound dumb, but he was in his sixties for so long that 70 comes as a real shock. In part because 70 actually sounds like the age of someone who is old. And how can that be?

People who are in their 70s and 80s often tell me that getting old is a lousy business. Painful, too. My dad has had a hip done; my mom is recuperating from knee surgery. And it's not as though things continually improve from that point on. Still, I look at my parents and they have in many ways reached a point of equanimity that was not open to them in the prime of their life.

Goodness knows, it sounds like George Osmond had his ups and downs, but a decent life overall. I imagine there are worse ways to go than to die of old age.
Posted by LKT at 8:45 AM 0 comments