This Week in Britishness

As an unrepentant tea drinker I of course lean toward the Anglophilic, but even I have to concede that these two pieces take Britishness to extremes. 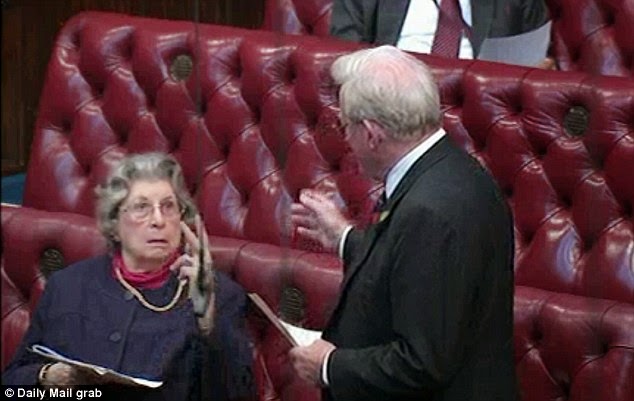 The first was an excerpt of a memoir called Coming Up Trumps that I have to admit sounds wonderful, written by the 90-year-old Baronness Trumpington, nee Jean Campbell-Harris, who seems to have been brought up in luxury and been willing to do pretty much anything to anyone at any time. The photo here is the time "when my good friend Tom King – Lord King of Bridgwater – commented that those people who had served in the Second World War were starting to look ‘pretty old’, it was a natural reaction to stick two fingers up at him." As one does when in the House of Lords.

In the snippet in the Daily Mail, the Baronness writes (among other things) of her time at Bletchley Park.


Although essential, the work formed a dull and exhausting routine. Whenever we could, we rushed up to London and danced all night, then ate enormous breakfasts at a Lyons Corner House, with fake scrambled eggs, fake everything. We always went to the 400, a nightclub on Leicester Square that doesn’t exist any more. We had such happy parties there. I was horrified once because I was at one table with a boyfriend and I looked round and saw my brother at another table with a girlfriend. That was bad enough. But then I looked round again and there, at a third table, was my father. With a girlfriend.

I will have to get my hand on this memoir when it comes out.

And the second moment of Extreme Britishness...well, this is where I have to admit that I regularly and very happily listen to The Deadline, the weekly obits podcast produced by the Daily Telegraph. And there is this very odd section in the middle about letters written to the Telegraph that almost makes me wonder if it's a parody of Britishness.

Take this week, for instance, in which there is a segment about letters on "the proper way to fold fitted sheets" that somehow leads us to King Alfred bowling the cakes, George II's son Fred "who was killed by a cricket ball," and Rule Britannia...I'm still not sure how that worked. You'll just have to listen to it yourself. And say no to the tyranny of hospital corners.