Having been advised that I would be giving the blessing at the annual Thanksgiving dinner, I actually stole something from the internet prepared in advance. This blessing, slightly edited, comes from the Clergy and Comedians Torah Roundtable, and doesn't that sound like a terrific group? I do like how as the prayer progresses, I'm lured into something deeper and less shticky. But any prayer that gives thanks for Mel Brooks is OK by me.

O Great Spirit, Who in Infinite Wisdom has brought together Chanuka and Thanksgiving. Thank You for giving Christmas a break from the Jews.

As we dine in the light of a menorah on kosher turkey and on latkes with a shmear of cranberry sauce, we recall two great movements for religious freedom, American and Jewish, the combination of which yielded Groucho Marx, Joan Rivers, Mel Brooks, Gilda Radner, Jon Stewart, Jerry Seinfeld and Sarah Silverman.

May we be blessed with more religious freedom and less religious certainty. May we be less inclined to laugh at others, and more prone to laughing at ourselves. May our leaders learn from our modern prophets – speaking in clubs and old films, on HBO specials and Comedy Central shows – who unite us in our humanity, humility and vulnerability.

May our tears of laughter allow us to be open and unsure, and may God bless all of us, who are just muddling through, making meaning as we can. And may our descendants celebrate the next Thanksgivukkah, in 77,000 years, in a world of laughter and joy.

On Friday, we marked the 50th anniversary of the death of a man who has had a lasting impact on our world. That man, of course, was C.S. Lewis. Although he wrote a great many works about Christian faith and life, he is probably best well-known for the Chronicles of Narnia, seven children's books that center on the magical world of Narnia, guarded and guided by Aslan, the Great Lion, son of the Emperor-Over-the-Sea.

Aslan is the Christ-figure for Narnia, as Lewis himself explained in a letter he wrote in 1961:


The whole Narnian story is about Christ...Supposing there really was a world like Narnia...and supposing Christ wanted to go into that world to save it (as he did ours), what might have happened? The stories are my answer. Since Narnia is a world of talking beasts, I thought he would become a talking beast there as he became a man here. I pictured him becoming a lion there because a) the lion is supposed to be the king of beasts; b) Christ is called 'the Lion of Judah' in the Bible.

I thought I would be able to do a lot to draw parallels between today's gospel reading of the crucifixion and the parallel plot point of Aslan's death on the Stone Table in The Lion, the Witch, and the Wardrobe, but I encountered an unexpected problem: It's very easy looking at Aslan to assume he is a king. He's majestic and powerful and gorgeous. When the White Witch binds him to the Stone Table, they make a point of mutilating and shearing Aslan to make him look less kingly. But one of the remarkable things about the kingly nature of Jesus is that he always looked ordinary. There was nothing in his appearance (so far as I know) to set him apart from anyone else. The only thing that sets Jesus apart from the two other men being crucified around him, the only thing that makes it easy to pick him out, is that there's a sign over his head, saying "This is the King of the Jews."

I started wondering, what if C.S. Lewis had chosen instead to make Aslan a very ordinary animal. A dog, say -- not pure-bred. Just a mutt. A lab-pitbull mix, is what I was thinking. How would that have changed things?

Aslan is a wonderful character, but you have to admit, he looks kingly and noble from the get-go, all the more so when you're voiced by Liam Neeson. I wonder if one of the reasons -- one of the many reasons -- Jesus stirred up such violent passions against him is that he didn't look the part. He didn't look like a Lion of Judah; he looked like your average, skinny street dog of Nazareth.

But even though he didn't look the part, he still sounded the part. If you look at the two things Jesus says while on the cross, they sound mighty kingly, almost noblesse oblige: "Father, forgive them, for they do not know what they are doing," and "Today you will be with me in paradise." There's even some arrogance in that. Here he is, powerless and nailed down, and he still speaks as though it is in his power to dispense forgiveness and welcome.

I break radio silence to bring you the wonderful story of Mavis Batey, a codebreaker at Bletchley Park who died on November 12 at the age of 92.


She was reading German at University College, London, when war broke out, and decided to break off her studies and become a nurse; but she was told that the country could make more use of her as a German linguist. “So I thought, great,” she recalled. “This is going to be an interesting job, Mata Hari, seducing Prussian officers. But I don’t think either my legs or my German were good enough because they sent me to the Government Code & Cipher School.” 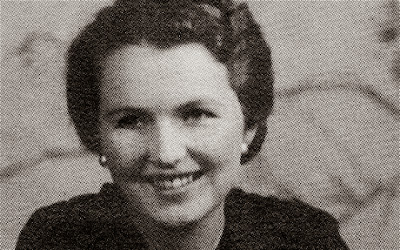 And a good thing they did, too, because she, one other young woman named Margaret Rock, and Dilly Knox were responsible for cracking the code of the Abwehr Enigma machine, which in turn allowed for the success of the D-Day landings. Mavis is the one who "broke a message on the link between Belgrade and Berlin, allowing the reconstruction of one of the rotors." She was 20 at the time.

I hope your week goes better than this.