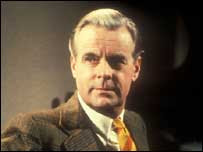 Does anybody else remember the Lord Peter Wimsey series on PBS with Ian Carmichael? I enjoyed those and thought he was well cast. I love this subhead:

Ian Carmichael, the comedy actor who has died aged 89, was once asked what he would do if he won £1 million. He said he would improve his wine cellar with a lot of "absolutely spiffing clarets".


Sounds like LPW to me. In a cross with Bertie Wooster whom he also played.
Posted by LKT at 12:12 PM

Email ThisBlogThis!Share to TwitterShare to FacebookShare to Pinterest
Labels: obituaries

Carmichaels may come and Carmichaels may go - but Wimsey, like Holmes, will live forever! Having said which, I must admit that I will also now plan to observe a little moment of silence before I watch those PBS/Wimsey re-runs ... if not for Ian Carmichael in Clouds of Witness, I might never have discovered Dorothy Sayers. Thank you, Ian Carmichael.

I loved the Carmichael run at Wimsey. Sorry to hear he has left us. But I completely agree with Anon. I came to the books first, through my mom. But we were so excited when the series was brought to the small screen!

Yes, indeed. Ian's Lord Peter is whom I see in my head, whenever I read the books. I, too, came to them after the PBS "originals" - in my mind, the "other guy" playing him doesn't hold a candle to the cheery insouciance he did.
Lovely job! Wish it was on Netflix!