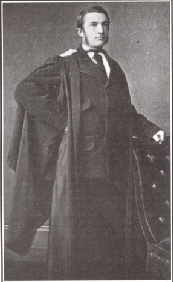 I have to admit I'm a bit depressed by the proposed commemoration of John Roberts today. Not because there's anything wrong with John Roberts, mind you, who ministered faithfully and well among the Shoshone and Arapaho in the late 19th and early 20th century. It's just, what does this say about typical ministry if Father Roberts' is so extraordinary.

[H]e set about his work by learning all he could about Native American customs and beliefs, believing that by knowing the people he hoped to minister to he would be more effective. He also learned the native languages, eventually translating the gospel for his Native American congregates.

He also "earned the trust of the tribal leadership" and was known for his "fairness in dealing with them."

Doesn't it seem like this should be the baseline for, you know, being a Christian, much less ordained ministry and mission work? Father Roberts sounds like a very worthy man and worth remembering, but it does unsettle me that he needs to be held up as an example. Learn about the people you're working with and treat them fairly. I suppose we still need to be reminded that that's our call. Kind of sad.
Posted by LKT at 10:52 AM

Email ThisBlogThis!Share to TwitterShare to FacebookShare to Pinterest
Labels: saints, things that irk me

Once you accept that the people you are serving are indeed people, it's probably not that exceptional to work on getting to know them and then to treat them fairly - but I'm guessing the reason John Roberts is in the new lectionary is that the people to whom he ministered were individuals whom many of his contemporaries did not actually think of as people at all. Indeed, the people to whom he ministered were members of groups whom many of his contemporaries probably still thought of as former enemies as well. Overcoming popular prejudice sets a tougher standard for ministry, I think, and one that may indeed bear emphasizing time and time again.