Thoughts on the altar guild

A couple of friends and various blogs pointed me to an editorial by Eric Lax in the NY Times, supporting the election of Mary Glasspool, a same-sex partnered woman, as suffragan bishop of Los Angeles. (I’d like to point out that there now seems to be no scandal about electing a woman, as two women were elected that day but only one made headlines. Remember when that would have been A Really Big Deal?)

The article itself is good, but there’s one part that leapt out and grabbed me by the front of my scruffy sweatshirt. Lax pointed out,

Until 1971, when women were first ordained as deacons, the highest post a woman could attain was member of the vestry, the elected group that manages parish business. But even that was uncommon; usually the highest ranking woman in the parish was the leader of the altar guild, which arranges the flowers in the church, sets up the Eucharistic vessels and washes and irons the linens used in the service.

Seeing that was a revelation to me, something which might begin to explain a relationship that has always confused me: the relationship between clergy and altar guild. 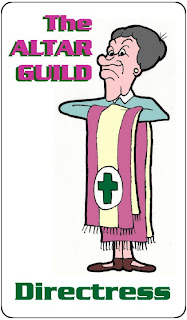 Now, I’ve served on altar guilds at two churches; I was the sacristan at CDSP for two years; and I have nothing but respect for the work of the altar guild. But I’m here to tell you, that as a priest, I have never encountered more conflict than with the women of the altar guild. The amount of resistance, anger, and territoriality has often taken me by surprise.

I think this can be summed up succinctly in an encounter I had a few years back. I realized on my way to church on Sunday morning that I had forgotten to tell the head of the altar guild that I had made a change in some part of the set up for that morning. I knew this was going to be trouble and instantly went to the sacristy to apologize and explain. The head of the altar guild let me know in no uncertain terms that my behavior had been unacceptable and ended by telling me, “Don’t fuck with the altar guild.” Not language you hear every day from septuagenarian widows.

I think she said what a lot of altar guild leaders secretly and honestly feel. And part of that, I suspect, stems from the fact that it used to be they were the highest ranking women in the parish, but now where are they? Now that women run the joint, are bishops, priests, deacons, wardens, treasurers, deputies to General Convention – not to mention running the denomination in both houses – what status is there in serving on the altar guild? The truth is, not a lot.

That’s not all there is to it, of course, so forgive me for this superficial analysis, but I do wonder how this loss of status affects the attitudes of the long-time members of our altar guilds. What’s more, how many of them joined because priesthood was not an option? I’m trying to imagine how many bishops, priests, deacons served out their life ministries in the altar guild because there was no other outlet for it. Well, you could also be a DRE—director of religious education—but that position is largely vanished now, while the work of the altar guild is still largely unchanged.

And still largely unrecognized. Do you notice, of a Sunday, that your purificator has been ironed? No? Neither do I. But the altar guild still does it, using those thankless linens that need to be laundered and starched and ironed just so.

I’m just imagining all those thwarted priests ironing linens in dingy sacristies year after year for decades. It makes me sad. The church fucked with the altar guild big time. 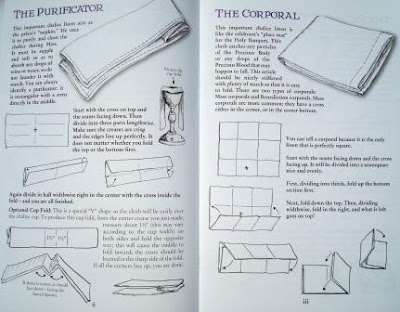 On a related note, I was elected to Vestry last week. I told my mom this was happening - now, there's no Vestry in the Catholic Church, though there's usually a Parish Council that advises the Rector, but Mom wouldn't be familiar with the term. So she was pretty confused when I told her and asked me if that meant I'd be having to wash all the altar linens. I explained it to her, but I'm not sure she quite gets what I'll be doing. (then again, do I?)

As for your point - I don't know - I mean, you're right that the altar guild is a group that does a lot of work and gets little respect - but in the Catholic Church, they are just as territorial and bitchy (feels a little weird to write that, but its true) and the power hierarchy there hasn't changed. Then again, I'd imagine that most Catholic women who want to become priests convert. (Except for my mom - as she puts it, "those a-holes are the ones that need to change, not me.") Then again, we often work with Churches where it doesn't matter that every priest and deacon is a man - the real power is in the ladies of the church. They get shit done and if they don't want it done, it doesn't happen.

Perhaps Laura's and Lorin's observations could both make sense if we think about the context outside the church as well as inside - regardless of what women can or can't do in different branches of Christianity, they can do more in the public world as a whole than they could before. Perhaps this new horizon of expectations outside the church helps account for frustration inside the sacristy.

Or perhaps not. Has anyone asked anyone on an Altar Guild?

(The head sacristan in the church I serve is a gay man..... same story, I think.)