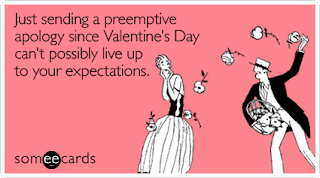 Happy Valentine's Day, perhaps the toughest holiday of the year. I think it may actually tougher for many couples than for single people. If you're single, you just eat chocolate, watch Casablanca and feel sorry for yourself. If you're in a couple, there's intense pressure to know instinctively the expectations of the person that you love. Failure is not an option.

A few years ago, I read an article from a pastor who specialized in counseling couples. He said that one thing he heard over and over from couples was that one or the other was "disillusioned." He said his answer was always, "That's great!" It meant, he said, that they had finally gotten past the illusion of the other person and were now in a place to be with the person as they really were, not the fantasy they imagined.

Two very different stories of disillusionment appear in the readings for today. First is the story of Moses who has gone back up Mount Sinai to get a copy of the tablets of the law. When he returns, his face is glowing, which freaks people out, so he covers it in a veil. What you hear implied in Paul's letter to the Corinthians, though, is that when the glow fades, Moses keeps the veil on because he doesn't want people to know What would happen if they saw he no longer had that mystical glow? Would they think his connection with God had been broken? Would he no longer be acceptable as a leader? They would be disillusioned, and what would happen then?

And then there's the gospel. When I first saw the text, I thought to myself, "I hope we don't have to read the second half." But then I thought the second half is perfect! It's a complete disillusionment. Jesus comes down from the mountain and is cranky and exhausted. He's rude and insulting and snippy and not at all like that magnificent creature we saw transfigured with Moses and Elijah on the mountain. And that's part of the story too.

So often we don't let Jesus be human. He has to be the glowing white Jesus of the mountaintop or it doesn't count. But we also claim in our creeds that Jesus is fully human, not glowy superhuman. And the good news about that is that if Jesus can be fully human, then so can we. When we describe ourselves and talk about our faith, we don't need to limit our description to our glowy mountaintop experiences. We can also talk about what frustrates us, what we haven't gotten yet.

We don't need to wear a veil of spirituality to hide the fact that we don't glow. Instead, in Paul's words, we can commend ourselves to conscience of everyone in the sight of God -- and in the sight of one another. Disillusionment is a good thing. It means you don't need to be glowing white all the time to be loved.
Posted by LKT at 9:41 AM