For Valentine's Day: the most romantic obituary I've ever seen 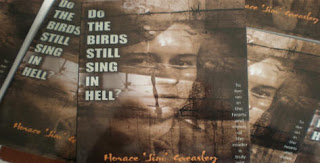 I now subscribe to the UK Telegraph's obituaries, don't you know. On Friday, I read the obit for one Horace Greasley and now I want to know WHY ISN'T THERE A MOVIE?!

Horace Greasley was a POW in WWII who fell in love with the German interpreter for his POW camp -- an interpreter, mind you, who was hiding the fact that she was Jewish.

Within a few weeks Greasley and Rosa were conducting their affair in broad daylight and virtually under the noses of the German guards – snatching meetings for trysts in the camp workshops and wherever else they could find. But at the end of a year, just as he was realising how much he cared for Rosa, Greasley was transferred to Freiwaldau, an annex of Auschwitz, some 40 miles away.

The only way to carry on the love affair was to break out of his camp...Greasley reckoned that short absences could be disguised or go unnoticed. Messages between him and Rosa were exchanged via members of outside work parties, who then handed hers on to Greasley, the camp barber, when they came to have their hair cut. When, with the help of friends, he did make it under the wire for an assignation nearby, he would break back into the camp again under cover of darkness to await his next opportunity.

Did you catch that? He escaped from the prison camp over 200 times--and would sneak back in!

Greasley was held prisoner, working for the Germans in quarries and factories, for five years less one day, and was finally liberated on May 24 1945. He still received letters from Rosa after the war's end, and was able to vouch for her when she applied to work as an interpreter for the Americans.

Not long after Greasley got back to Britain, however, he received news that Rosa had died in childbirth, with the infant perishing too. Horace Greasley said he never knew for certain whether or not the child was his.


AAAAHHH! Is that the most tragic operatic thing or what?

He eventually did marry -- in 1975. And there's a book about his experience called Do the Birds Still Sing in Hell?, which sounds amazing. The obit was mighty compelling by itself, though. If it were longer, I'd have to have boxes of Kleenex and chocolate. ~sniffle~

Happy Valentine's Day!
Posted by LKT at 7:48 AM