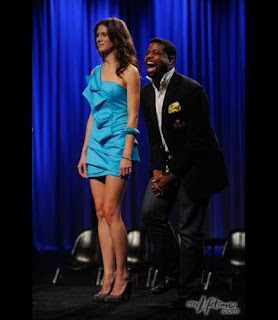 It's all Jon Stewart's fault that I am now addicted to Project Runway. Tim Gunn, who critiques the contestants' designs, was a guest just before the last season started and I've been a fool for the show ever since.

This season's contestants includes Anthony Williams who introduced himself in the very first episode by saying, "Honey, it is hell being black and gay in the ghet-to," in this wonderful Southern drawl. He's always the one with the best quips ("Life isn't fair; I don't see why Project Runway should be.") and appears to be adored by one and all.

And then he kept sneaking in Biblical references. Well, that's not exactly right. They just naturally appear in his speech. When he had to pick a partner for a team challenge he said, "I choose this day..." which may not sound like much, but sounds like Joshua to me.

There was an interview with Anthony in the Huffington Post in which he continues to be delightful. The very first question was, "What's it like for you now that the show has started to air?" to which he said,

You know, I haven't been leaving my house really, but I went out this weekend and it was crazy. I am shocked and amazed that people know who I am. My pastor called me to the front of the church on Sunday and said "Anthony, you are turning that show out!"

And then on last week's episode, young Mister Anthony says to his roommate, "Get up, Jay. It's time for Bible study." And what do you know, there's Anthony with his Bible open on his bed.

To all of which I want to say, God bless you, Anthony, for being yourself and by so doing challenging the stereotypes of black, gay, Southern and Christian. Oh, and I'm rooting for you on the show, too.

(which is on tonight at 10 on Lifetime, if you want to see what I'm nattering on about.)

Update: OK, I can't stand it. Y'all need to see Anthony in action. Here's his audition tape.

Anthony is awesome. I was so happy for him when he won this week!

Thanks for the link to the interview. I needed more Anthony in my life today. =)