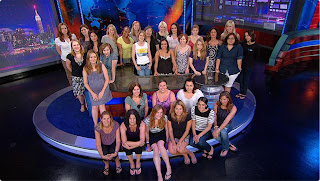 Because I haven't been snarky enough this week, let's talk about sexism for a moment, shall we?

There's been a bit of a kerfuffle around The Daily Show hiring only its second female correspondent since 2001. An article on Jezebel claims that "it's a boys' club where women's contributions are often ignored and dismissed." In response, the women who work on The Daily Show posted an open letter saying, "while it may cause a big stir to seize on the bitter rantings of ex-employees and ignore what current staff say about working at The Daily Show, it's not fair. It's not fair to us, it's not fair to Jon, it's not fair to our wonderful male colleagues, and it's especially not fair to the young women who want to have a career in comedy but are scared they may get swallowed up in what people label as a 'boy's club.'"

In response, another writer, at the end of a fair analysis of the sexist forces at work in the world (of The Daily Show, comedy, and everywhere), made a huge gaffe as she ended by saying, "if you respond to suggestions that your hiring practices may be sexist with a letter signed by all the women on your staff dismissing these claims out of hand, then your hiring practices are almost certainly sexist." Thus hurting her own arguments by claiming that the ladies can't be trusted to speak for themselves or their own experience.

All this for me personally is a backdrop to a) my recent ranting about Elizabeth Cady Stanton & co.; b) the current debate before the Church of England about whether and in what manner women can be bishops; c) the recent "mitregate" debacle; and d) my own hunt for work in the church. So I'm glad for The Daily Show issue to be able to explore this at a one-step remove. Because, the truth is, it's complicated. Here are my vague thoughts about what might be more productive in addressing any sexism at The Daily Show--or perhaps the church.

1) Get your data in order

You know about me and data. I love data. Data is helpful. One of the things that's hardest for me to grapple with when considering sexism is the question: Is this real or am I imagining things? Hard data can help with that. Jezebel didn't do a bad job getting their facts. I think they weakened their argument, however, when they went for personality, saying, "The host and executive producer's onscreen persona is lovable mensch, but one former executive on the show tells us 'there's a huge discrepancy between the Jon Stewart who goes on TV every night and the Jon Stewart who runs The Daily Show with joyless rage.'" That just opened them right up to the "disgruntled employee" line. Much harder to argue with "only one female correspondent since 2001" or "this year alone, the show’s roster of guests has featured 63 men, but only 13 women."

2) It may be counterproductive to tell someone they're sexist.

One of the things that I find problematic in the critique of The Daily Show is that what they seem to want to conclude is "Jon Stewart is sexist and should stop being sexist." To which the women of The Daily Show say, "Jon Stewart is the opposite of sexist." So that didn't get anybody anywhere except to get women arguing amongst themselves about who's right about who's sexist. And if he is or if he isn't, what has changed? Of course, their goal may be getting readers and sparking debate rather than actually changing The Daily Show, in which case, mission accomplished! But if that wasn't what they were after...

3) Figure out the goals

One thing that might have changed this debate would have been for Jezebel to figure out what actual, measurable result they would like to see. It's one thing to say an organization is a boy's club; it's another to say, "By 2015, we would like to see that 50 percent of the employees of The Daily Show are women, with at least 1/3 of the on-air personalities and 1/3 of the guests being women." It's more fun to tear people down, but it seems to me more practical to find goals and move toward them.

4) Humor is a powerful tool 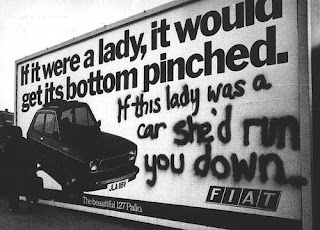 Weapon, even, I'd like to say. I don't want to give the impression that this is all about being nice and saying please and working within the system. But one way in which the Jezebel piece lost (rhetorically) to the letter from the women of The Daily Show is that the letter was funny, leaving readers with the impression that those complaining about The Daily Show weren't hired because they weren't funny, which is a problem for a comedienne. Remember that "joyless rage" quote above? Compare it with how the women at TDS describe Jon Stewart:

But what's he really like? Well, for a sexist prick, he can be quite charming. He's also generous, humble, genuine, compassionate, fair, supportive, exacting, stubborn, goofy, hands-on, driven, occasionally infuriating, ethical, down-to-earth and--a lot of people don't know this--surprisingly funny (for a guy brimming with “joyless rage”). How else to describe him? What's the word that means the opposite of sexist? That one.

If you can laugh at your opposition and find ways for others to laugh at them too, they are hugely defanged.

5) Do NOT undermine other women!

I still cannot believe that writer suggested that Stewart had the women who work for him write a letter on his behalf. Way to ruin your credibility, there! They may be wrong, but suggesting that these women were somehow brainwashed into writing a supportive letter--it just boggles the mind. Women can certainly disagree, but to suggest that the disagreement is because of The Menfolk suggests your argument has no merit.

OK, I have a lot more thinking to do about this, and this is incredibly long and yet still very incomplete. Your thoughts and comments, as always, most welcome. More snark, no doubt, next week.
Posted by LKT at 12:13 PM

Agreed with everything, save one detail. Date ARE helpful, because they ARE plural.

Well, that ruined it. I can't post corrections and then have typos.

Data ARE helpful, not "date" are helpful.

Snark is a beautiful thing. You are right, of course. I find it impossible to write "Data are," though, probably because of too much ST:NG in my younger years.