Note: This is total Episcopal Church inside baseball. If that's not your thing, I'd advise you to skip this post entirely.

So there was a kerfuffle in the Episcopal Church over the past couple of days -- not the usual kerfuffle, about human sexuality and/or property disputes. This was a much gentler and intimate kerfuffle about how we want to represent our denomination to those outside our immediate circle through outbound marketing materials.

The materials in question took the form of slogans that could be printed off as postcards. As noted by Adam Trambley and others, these materials were problematic. And by "problematic" I mean very bad. I'll talk more about them below.

To our denomination's great credit, the church center responded to the criticism by taking down the postcards and putting up this message:

That said, there isn't actually a way for someone to direct feedback about this campaign to the people or department in charge that I could find. As an initial suggestion, I would love it if the church center would include a link on this page to allow people to give feedback or answer a survey -- or something.

But I am going to take them up on their encouragement to share ideas and criticisms, which I think are still appropriate. This is not in order to beat a horse that's already been put out of its misery, but because I think it will be helpful to analyze what went wrong in order to consider what needs to happen next.

1) We need to move beyond print media. This campaign was designed for "postcards, ads, and billboards." Why limit ourselves to these forms of media when there are so many easy ways for people to share online? There's no mention of using these on Facebook, even though people did indeed share the visuals that way. There's no mention of embedding the graphics in the church's website, or encouraging people to use it as a badge on their blogs with, say, a link to their local congregation. There are lots of creative ways to make content shareable. Which leads to the next point:

2) We need to move beyond ads coming from the institution itself. The hard truth is people don't trust ads coming from brands or companies saying "buy me!"; they trust their friends. This is not news. And this holds true for The Episcopal Church as a "brand" as well. Sending out a postcard -- even a good one -- that comes from the institutional church saying "Hey, we're great! You should totally check us out!" is not going to be nearly as effective as helping the members of church talk positively about its place in our lives. I mean, look at this chart. 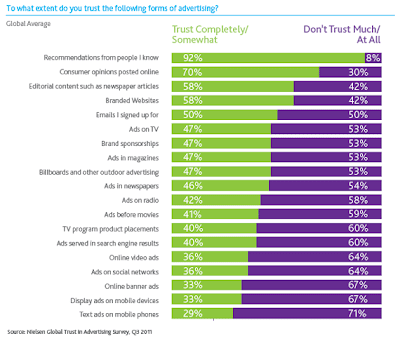 Speaking of the church...

3) We've got to stop talking about the church as "a place people go to on Sundays."  Or at least as if that were its only manifestation. What I hope we mean by "The Episcopal Church welcomes you" is that we who worship God as part of the church in the Episcopal tradition will love you and care for you whether or not you ever darken the doors of one of our buildings. We welcome you by our prayers for the world, by our advocacy efforts, by our service projects, by the Christian formation that we bring to the work that we do day by day. And of course we invite you to share in this way of being the church because we think it has a lot to offer.

So. Let's take a look at those ads: 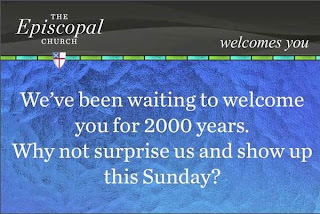 Ad #1: Aside from the tinge of the guilt trip about this ("you never call, you never write..."), my other big complaint about the text is that it tells a person absolutely nothing about the Episcopal Church. Is the Episcopal Church 2,000 years old? No? So what are you talking about? What is it? Where is it? What does it stand for? Why on earth should I show up? If you're surprised to see me, are you really welcoming me? 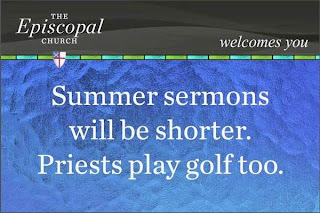 And then consider: You send this to a household with a single mom, what does this say to her? You send this to a household where someone lost his job, what does this say to him? It says (for one thing) that I, as a priest, feel most connected to (to use an unfair shorthand) the country club set. Yes, here in the Episcopal Church, we priests like to cut that boring ol' "worship" short to get to the really important stuff: hob-nobbing with the quality. Like us.

Here's my issue with Ad #3: if people in our communities can't see what we have been doing between Easter and Christmas, maybe the problem is with us. Can we instead say "Here's what we've been doing since Easter" with a photo montage of Episcopalians Doing Things.

That's another issue with this ad campaign as a whole: there's not a single image. It makes for a very passive, sterile kind of campaign, and it implies that The Episcopal Church is devoid of people or activity. And that's just plain not true.

We have good stuff to share. The reason this ad campaign bugged me so much is that it sold our denomination woefully short. We can do so much better. I think everyone has realized that.

Again, huge kudos to The Episcopal Church for listening to the criticism and pulling the campaign. Moving forward, I would love to see a campaign that's more generally shareable rather than institutionally driven. And I'd love a campaign that focuses on the fact that the Church reaches far beyond Sunday morning services and shows Episcopalians in all orders of ministry actively engaged in the work of the kingdom of God.

Email ThisBlogThis!Share to TwitterShare to FacebookShare to Pinterest
Labels: because I'm a geek, church, looking at images, overreactions, ranting, snarkiness, social media, the Episcopal church, things that irk me

All threenod those statements struck me as snarky and sarcastic. I was totally turned off by each and every one of them. Jan t

I hadn't heard anything about the latest ad campaign, but your story reminds me of an older ad campaign that I absolutely loved some thirty years ago, one that brought a friend of mine to church for the first time in a long time and turned me on to a congregation that I came to love, love, love.

Ironically, the best website I have found for it now actually advertises the Minnesota ad agency that put it together, not the Episcopal church itself:

Our favorite slogan at the time, though not one the agency is featuring now, was "Jesus Christ. He came to take away your sins, not your mind."

As I look at that slogan and think about that ad again now, I find that I am not so enthusiastic about the potential implication that other denominations are necessarily anti-intellectual - but I also find that I am more grateful than ever before for the acknowledgement that even a church full of smart talkers and tough critical thinkers is still willing to talk about sin and salvation.

Additional slogans from the same campaign:

"If you think church is only for families, remember Jesus was single."

I hadn't actually realized how deeply I'd internalized this one until last year's debate about whether or not Jesus was married.

And, over an image of the whole round orb of the planet Earth taken from outer space:

"Without God, it's just a vicious circle."

Actually, I wonder if this may be one of the issues: the church is trying to replicate its marketing campaign from the '80's, both in tone and in delivery.

It was a great campaign. And I love the tone those materials hit. But that was back when radio, television, and print campaigns were the only game in town. It doesn't seem like they've moved on from there.

Interesting observation. It's true that the original ad campaign, which my friend read in her campus paper, worked particularly well for the two of us when we were in college and graduate school and brought both of us to active engagement in a series of campus chaplaincies as a result. Today's college and university students, even if they were interested in exactly the same message in content, style, and tone, would be much more likely to come across any such message on Facebook or Twitter or some other social media that I myself have probably never even heard of.

I also think that both my friend and I were more in the situation of people who had grown up in church and moved away than in what I have gathered is the more common current situation of students and other young adults who have grown up without any particular church experience of their own at all.

All of this makes me wonder if there are ways of designing ad campaigns that can speak to different kinds of audiences together or separately. How can we attract both people with no religious training or experience at all and people with very different kinds of Christian or other religious training or experience? How can we attract old and young, rich and poor, English speakers, Spanish speakers, and other speakers, all the vast diversity of people all across the country?

Quite aside from the form of delivery, it seems unlikely that any single ad campaign can do the trick.

Thinking about content: What are the core concepts around which we might organize multiple messages for all these different audiences? How do we spread the gospel to all different kinds of people in ways that are both true to God and, if we think the Episcopal church is the best way of meeting God, distinctive to the Episcopal Church as well?

Thinking about tone: What makes us "like us" rather than simply "not like them"? Can we build up what we are without putting down what others are not?

These are the kinds of questions that I ask myself as I prepare my classes for Adult Formation every year. I find them hard enough to answer for people who have already chosen the Episcopal Church, but I think they must be even more important questions if we are going to attract people who are not here yet.

Thank you for opening the space to ask about all of these things.

The materials in question took the form of slogans that could be printed off as postcards. As noted by Adam Trambley and others, these materials were problematic. postcard app