Various & Sundry: Mostly things you're not sick of hearing about

It has been a long time, my friends, and goodness knows there are lots of things I could share with you today. But I will try to contain myself and keep it to the bare essentials, the most important and up-to-date...ummm...updates.

For example, we're all still talking about Miley Cyrus, right? I know there's been all sorts of stuff flitting about but I think all except this one article have missed the real issue, here: the terrible music.


Why do your children listen to knock-offs of Marvin Gaye? Why don’t they just listen to Marvin Gaye? Don’t you have Marvin Gaye records lying around, for crying out loud? Marvin Gaye sang about sex, but in a sexy way. Not in a rapey way. For example: while Marvin Gaye sings lines such as “You can love me when you want to, babe // This is such a groovy party, baby” in “Got to Give It Up”, a song that Thicke acknowledged being inspired by and preemptively sued the Gaye family re: copyright infringement allegations , Thicke sings “You the hottest bitch in the place". Since this is a blog post about shitty taste in music and not about feminism, I will ignore the fact that this is an incredibly offensive lyric and zero in on the fact that “you the hottest bitch in the place” is just plain ol’ incorrect English. Instead of worrying about your children watching scantily clad women being dry humped by men who could be their father, you should be more concerned about your children dropping verbs from their sentences.

Exactly so. May I have my curmudgeon card now?

It's strange that we're still talking about this almost one week later, given this eerily accurate description of the attention span of Twitter: 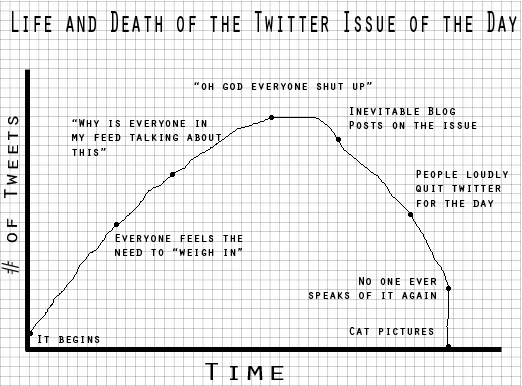 On to even more important things: your acting lesson from the week by Sir Patrick Stewart, who reviews previous lessons on the single-, double-, and triple-take, and moves into the extremely difficult quadruple-take. It is so difficult, he actually flubs it.

I deeply appreciated Jessica Creech's post Goodbye Church, Hello God. I feel like I'm in a similar place, in which going to church on Sundays is often not worth the cost of making that effort. Which is no sign of burn-out or loss of faith. It's...something else. 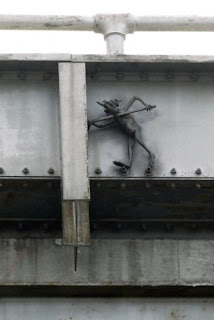 I wonder what has finally happened to the Bay Bridge Troll. Yes, troll, not toll. I will feel better knowing it has a good home when the new bridge opens next week.

Oh, update: "The troll will stay where it is for now, because there will be workers tearing down the old bridge and they will need protection. (This kind of quotidian witchcraft is quite head-spinning.) Later, it will be removed and put in a safe place somewhere near the bridge." I am relieved.

But you know what's even better than having a guardian troll under your bridge? Having a brand new puppy under your chair. Sam has arrived. Want to say hello?

songs of a soul journey said...

Sam Parker is even more cute than the first picture...

I think we are all trying to figure out how to use 'twerk' in a sentence you can use in mixed company. And, then you have to explain itto the geezers....