More reflections on the death of Osama bin Laden

I'm still thinking about what I wrote on Monday, about the mix of feelings I felt upon hearing of the death of Osama bin Laden. 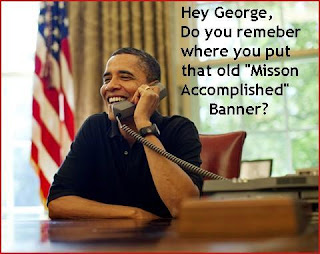 One thing I haven't seen acknowledged anywhere in great depth is that some of the celebration may not be about bin Laden at all, but about partisanship: "Our guy got him and your guy didn't." At least I realized that's part of what I'm feeling. I have to confess, there is something very satisfying, after seeing "our side" mocked and derided for being weak and conciliatory to feel one can say, "Hah! Your side is all hat and no cattle. You're just talk; we get it done."

I'm not proud of this. I'm happy someone's dead because someone I didn't like wasn't able to kill him and someone I like was? That's disturbing.

But as I said, the feelings are complex. One thing I'm feeling is hopeful. I hope this particular means is an end to killing. I know that's a naive reaction, but that is my hope. I hope that the troops will come home from Afghanistan, and that there will be an end to this foolish waste of life and resources.

I'm also mad. I'm mad at GWBush because he seemingly flitted from conflict to conflict without ever paying any price for it himself, all the while inflicting a huge cost on so many others.

A friend of mine who is on a business trip in DC is staying at a hotel on the same floor with two women whose husbands are at Walter Reed. One man lost a leg to an IED. Another, as his wife put it, "just got shot." Well, if that's all... But I find myself blaming W for this. He didn't shoot the man; he didn't plant the IED. But I still find myself furious, thinking "It's your fault these people are in this position!"

Maybe W is truly tormented by all of this. Maybe this isn't his fault. But it's hard to feel sanguine about it when you read something like this article by an army wife.

My husband and I stayed up to watch the breaking news about the death of Osama bin Laden on television. We were just as excited as everyone else, perhaps even more so. For us Bin Laden’s death was more than a national victory — it was a personal triumph, the taking back of years of our lives and vindication for all the friends we’ve lost.

But watching the spontaneous celebrations outside the White House and ground zero, we were struck by the paradox inherent in the cheering crowds. People, mostly in their 20s and 30s — the same age as our friends who have died and been forever injured — were cheering, “We got him!”

For nearly a decade of war, it hasn’t felt much like “we.” During this, the longest war in our nation’s history, a war fought by less than 1 percent of the population, the rest of the country has seemed mostly to ignore those of us in the military community, tuning in only for our scandals or deaths. And so “we,” in the context of victory, most accurately applies only to the very small number of men and women who have given more than any of us had a right to ask.

And I can't help but think it wasn't Osama bin Laden who asked this of you.

So what to do or think or feel? Strange to say, I think Abraham Lincoln stills says it the best:

With malice toward none, with charity for all, with firmness in the right as God gives us to see the right, let us strive on to finish the work we are in, to bind up the nation's wounds, to care for him who shall have borne the battle and for his widow and his orphan, to do all which may achieve and cherish a just and lasting peace among ourselves and with all nations.

The hardest part for me as I continue to reflect on the circumstances and significance of Osama bin Laden's death is the part where I don't know what really happened because there are so many different stories in circulation. Was bin Laden armed or unarmed? Was he using his wife as a human shield, or was he surrounded by guards? I don't know what happened there, and I don't know what to think. Although I don't know for sure that more information would make it much easier to wrap my head around such ultimate questions of life and death in a world at war, I still wish I could have some good solid facts to start with.