A story for World AIDS Day 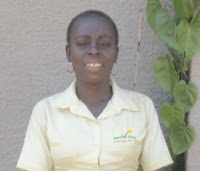 I was very moved by this story written by a young woman in western Kenya.

When I was 14, I was sent home from school sick. When I reached home, I developed an acute headache and then I was hospitalised. There they discovered some symptoms of meningitis. I was in hospital for one full week, and recovered from the meningitis. But they also told me I was HIV positive. I was so depressed, I couldn't imagine where it had come from because I was so innocent. I used to think anybody who could test positive must have acquired it through promiscuity.

I was staying with my sister, but when I tested HIV positive, she thought it would harm the family and so she sent me away. When I very first got the news, she was a bit supportive. But then she started to tell me not to touch her children, not even to share the table with them, or to wash next to them. Due to the stigma she told me to leave her home, which was around 4km away from where I live now.

The thing I really appreciate about it is that it's a story FROM a person with AIDS rather than ABOUT a person with AIDS. It's a tough little story, but not without hope. And the woman herself certainly doesn't seem to see herself as a victim.

What happens next? You'll have to read it to find out.
Posted by LKT at 3:39 PM