As they were listening to this, he went on to tell a parable, because he was near Jerusalem, and because they supposed that the kingdom of God was to appear immediately. So he said, ‘A nobleman went to a distant country to get royal power for himself and then return. He summoned ten of his slaves, and gave them ten pounds, and said to them, “Do business with these until I come back.” But the citizens of his country hated him and sent a delegation after him, saying, “We do not want this man to rule over us.” When he returned, having received royal power, he ordered these slaves, to whom he had given the money, to be summoned so that he might find out what they had gained by trading. The first came forward and said, “Lord, your pound has made ten more pounds.” He said to him, “Well done, good slave! Because you have been trustworthy in a very small thing, take charge of ten cities.” Then the second came, saying, “Lord, your pound has made five pounds.” He said to him, “And you, rule over five cities.” Then the other came, saying, “Lord, here is your pound. I wrapped it up in a piece of cloth, for I was afraid of you, because you are a harsh man; you take what you did not deposit, and reap what you did not sow.” He said to him, “I will judge you by your own words, you wicked slave! You knew, did you, that I was a harsh man, taking what I did not deposit and reaping what I did not sow? Why then did you not put my money into the bank? Then when I returned, I could have collected it with interest.” He said to the bystanders, “Take the pound from him and give it to the one who has ten pounds.” (And they said to him, “Lord, he has ten pounds!”) “I tell you, to all those who have, more will be given; but from those who have nothing, even what they have will be taken away. But as for these enemies of mine who did not want me to be king over them—bring them here and slaughter them in my presence.” ’

Here's the thing: I don't think the Lord in the parable is Jesus. This is not a "yoke is easy" kind of a guy. Jesus is not known for telling people "from those who have nothing, even what they have will be taken away;" that's a quote from the master in the story, not Jesus' words. Jesus's words are "Blessed are you who are poor, for yours is the kingdom of heaven" and "Woe to you who are rich, for you have received your consolation." (Luke 6;20, 24)

Jesus is telling this parable in Luke right before he enters Jerusalem before his crucifixion. If we are going to equate Jesus with anyone in this parable, shouldn't we equate him with the "wicked slave" who doesn't please the tyrannical master, but instead tells him to his face that he is a harsh man? Then again, it's not an allegory, but a parable; there's a lot more here than who is good and who is bad. I just resist the notion that we ought to be slaves to someone who is as clearly cruel as the master in this story.
Posted by LKT at 1:15 PM 3 comments 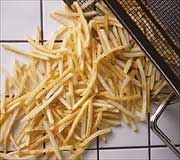 It's been a long time since I've come across a wonderful obit. I'm sure there have been many that I simply missed, and that makes me sad. But today--oh joy! oh rapture!--a lovely obit of someone I should have known existed: the co-creator of Cheez Whiz, who also helped make McDonald's french fries what they are today.

And I quote: "'Ed Traisman made a major, major contribution to McDonald's and french fries as we know them today,' said Lisa McComb, a McDonald's spokewoman."

"All the french fries in McDonald's restaurants originally were made fresh in each restaurant, with employees peeling, cutting and washing the potatoes before frying them." But there were problems with getting potatoes year-round, so Mr. Traisman, who owned the first Mickey D franchise in Madison, Wisconsin, "created a process of reducing moisture in the potato prior to freezing." No more of those fresh-made french fries for us, no sirree bob.

Now, mind you, I've eaten my share of frozen french fries, not to mention a ton of tater tots, so I'm not one to throw spuds. Back in the day, food efficiency was going to save the world and make everyone happier and healthier. Lord knows "food innovations" are still going on all the time, still with the promise that it's going to make us happier and healthier.

I still remember being in a class where the teacher talked about pre-packaged salad greens, as opposed to buying heads of lettuce. He had worked in the industry and talked about how this so-called "convenience food" was really the sweepings from the floor, generally filthy and of the lowest quality. But it is efficient. Pre-peeled carrots, pre-sliced apples, pre-shredded cheese. The death of Mr. Traisman reminds me, at least, of how many things we will look back on and say with amazement, "This was an advance???"
Posted by LKT at 10:38 AM 0 comments

I've got a cup of tea and the day off so it's time to opine.

Confess, actually, because there is a part of me that wishes Shannon Stewart had not gotten a hit yesterday off of Curt Shilling who was so close! to getting a no-hitter, he could taste it. Two outs in the 9th, and Shannon Stewart slaps a single to right field and the A's lose anyway, 1-0. I don't think I'm the only A's fan who would have liked to see Schilling get a no-hitter.

I have no idea what the man is like in person, but I have fond memories of Schilling in the ALCS and World Series of 2004, bloody sock and all. But especially when he was being interviewed in the team locker room after a game, wearing a shirt that said, "Why not us?" There was just something so endearing about the Red Sox that year, and I've had a soft spot for Schilling ever since.

So how does Stewart feel about breaking up a no-hitter like that? He had to hit, of course, but still, I imagine there's something satisfying about being part of a terrific no-hitter, even if you're on the losing end.
Posted by LKT at 11:32 AM 0 comments

I've gotten hooked on Dennis Lehane's novels these days--not "Mystic River" (yet), but his Patrick Kenzie/Angie Gennero novels that all the blurbs insist on calling "neo noir." I'm not sure what's "neo" about this particular "noir" except that it is set in contemporary times and the woman is just as capable of shooting people as the guy is. Though I don't see how that is different, or any more noir, than VI Warshawski.

Also picked up "The Maltese Falcon" because I've never read it and it was there, and as a point of comparison. Haven't gotten far enough to make a decent comparison, except to note that both are noir: flawed heroes dealing with thoroughly venal adversaries, and the suggestion that only the flawed can face what is truly awful.

But even I know not to believe the people who come into your office entirely, and you'd think these private eyes would know that by now. A long time ago I read a biography of a private detective who stated that up front: the people who hire you are never telling the whole truth. Even the hardest boiled of this literary detectives, though, seem eager to believe. And I, as a reader, am eager to believe everything the narrator tells me, so I guess I'm not much different.
Posted by LKT at 3:00 PM 0 comments

Reading about the National Spelling Bee this morning made me think about my own wasted childhood of underachieving sloth. OK, so I was a straight-A student and played the flute and was on the staff of the school newspaper, big deal. That could hardly get me into a state school these days.

I can't help but think they must be exhausted, these kids who must strive and strive in order to get into a good school. And what do they do then? What is it like after college for these wunderkids when it is no longer a matter of traveling from accomplishment to accomplishment, but a slow, steady stream of doing your best?

I suppose I was one of them, for the time, expected to go on to Great Things, and I certainly feel I have adjusted to the routine with a measure of contentment. But I still look at these bright young things and think, "Why are you working so hard?" Life seems to happen in the pauses and the steady forward movement, not the Accomplishments with a capital A.

I still remember with tremendous chagrin the pointed truth of the novel "All Is Vanity" when the narrator realizes at the end, "I thought I was brilliant, but I was merely smart." Oh, that is so true. There are so many of us out there who had been prompted into brilliance and I suspect will have to settle for smart in the end.
Posted by LKT at 10:57 AM 0 comments