A new person has appeared in my life. Actually, she's been here a long time, but I'm beginning to hear her voice more clearly, and I wanted to introduce her to you. Here she is--the charming Ms. Beezle-Bubb. 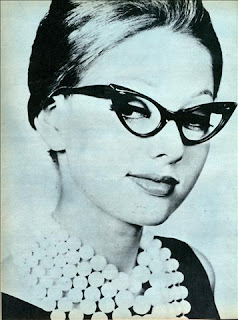 Obviously very attractive, she takes care of herself, but is not vain--no, of course not. That's why she wears the heavy glasses. She only wants what's best for you, my dear, and anything she says is there to help you understand. She's particularly clear about grammar because grammar has very clear rules that anyone should be able to follow. Mostly, she hates it when you disappoint her, sweetie, because she knows you could do so much better than that. If you really tried and put your mind to it. Really, she just wants what's best for you.

I saw her posting a comment the other day on a blog under a pseudonym, but I knew right away it was really her. The post pointed out that God hates shellfish, calling them an abomination in Leviticus. I thought that was spot-on, but Miss Beezle-Bubb pointed out the error of anyone thinking that shellfish=abomination might have something to say about lying-with-a-man=abomination with this pithy reply:

I wonder why those on the episcopal left, after 7 years, have never really taken the time to understand why the shellfish argument is so embarrassingly bad? Really Scott, I expect better of you.

Indeed, the shame. Why haven't we taken the time when obviously those using Leviticus as a proof that homosexuality is sinful have clearly thought through all of the Biblical scholarship on the subject. Thank you, Ms. Beezle-Bubb, for shining the light of truth on the darkness and error of our ways.

I shall continue to share your wisdom whenever I hear your voice.

Update: She tells me that she prefers to be called Ms. I apologize for the error.
Posted by LKT at 12:28 PM

Why the sex change?

I can only suppose that Ms. Beezle-Bubb thought she would be taken more seriously as a male, sexism being what it is.

Thanks for that reference page on the biblical scholarship. I look forward to exploring the sites listed.

Actually, I sometimes wish people wouldn't use the shellfish argument because the nay-sayers will claim that Peter's vision of the sheet takes care of purity codes specifically relating to food. Forgive me if I'm only stating the boringly obvious but I imagine that's the "embarrassment" referred to.