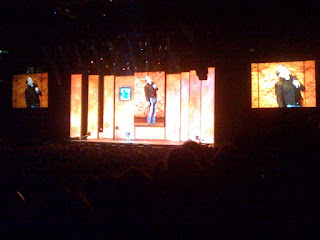 Last Saturday night, I got to see Eddie Izzard live at the Oracle Arena--whoo hoo! There he is, that little speck on the big, big stage. He came on stage a little after 8:00, walked back and forth for an hour, making us laugh, took a 15 minute break, then came out and made us laugh for another hour, before sending us out into the night telling us to be good to one another.

It's just impressive as all get-out, what he is able to do. Characters would show up early in the show (e.g. a velociraptor wearing a porkpie hat) and would appear unexpectedly later on. And these characters were mostly developed through really amazing miming. He did a fantastic job of following through on the mime to its logical conclusion so if, say, a Spartan ends up on the end of an 18-foot spear, Eddie didn't just go on to the next thing without making sure that the Spartan didn't somehow logically (I use the word loosely) get off the spear. Fantastic.

Not once did he mention himself personally. Not once did he talk about running a marathon a day for six weeks. Instead, he told the entire history of the universe (with gaps). A large part of that was skewering Biblical literalism. I particularly liked his take-down of Intelligent Design in which he impersonated an appendix who, unless he was given some grass, was going to explode. He was talked down, though, by being given a place at the end of books.

The only problem as I saw it was that he took some cheap shots at the Bible in which he, perhaps deliberately, mangled some stories. I kept thinking, "Ummm....that's not what it says." I'm just too much of a Bible geek at times. Though I laughed my head off at the "covet your neighbor's ox" bit at the end.

He makes it quite clear he doesn't believe in God, but emphasizes over and over again, and quite overtly, "Love your neighbor as yourself." Not a bad message to get from a comedian.

Email ThisBlogThis!Share to TwitterShare to FacebookShare to Pinterest
Labels: things that impress me, well I think it's funny